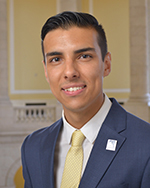 November 2015 Fellow of the Month

Mateus’s interest in higher education access and education reform stems from the time he served as a member of the Newark Board of Education during his senior year of high school. While at Brown, Mateus consulted on a project to develop a college-going culture for a school district in California. Since too few students were attending four-year post-secondary institutions upon graduation, Mateus spoke with several stakeholders to identify challenges and opportunities as the district aimed to better support Latino students in the college-going process. As a result, the district has restructured its guidance staff and is reassessing its graduation requirements.

As a CHCI Higher Education Graduate Fellow, Mateus hopes to learn more about the national higher education policy landscape, paying particular attention to minority representation in the nation’s most selective universities. Mateus is committed to ensuring higher education is accessible as a fundamental right to all students.