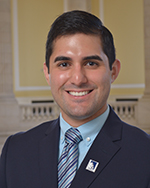 School: The University of Texas at Austin

Originally from San Antonio, Texas, Matthew graduated from The University of Texas at Austin in 2015 with a B.A. in English. Throughout college, he accumulated a wealth of professional experience that taught him invaluable lessons about the workplace beyond his education at the university.

Matthew is interested in learning how he can work through public policy and the law to champion meaningful change in education, voter protection, LGBTQ equality and immigration. Through the pursuit of law school and ultimately public office, Matthew hopes to learn ways in which to advocate for positive change for the Latino and LGBTQ communities and their allies.

Matthew has conducted research specific to teenage pregnancy for former San Antonio Mayor Julián Castro’s Teen Pregnancy Prevention Collaborative and helped organize then-State Representative Joaquín Castro’s Literacy Fair for the inner city’s west side. At present, he continues his volunteerism as an invested advocate for the LGBTQ community, through Equality Texas and the Human Rights Campaign, and as an aid to lawful permanent residents who pursue citizenship through workshops by the National Association of Latino Elected and Appointed Officials Educational Fund.

As a CHCI Public Policy Fellow, Matthew hopes to become more familiar with public policy at the national level, develop a greater sense of social responsibility, and reinforce his identity as a Latino in order to become a more impactful leader.