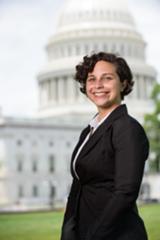 Meredith comes from a lower-middle income neighborhood that is known for having some of the most polluted air in the nation. She was raised by two hard-working women, her mother and her sister. Her mother comes from the heart of Guatemala and taught Meredith to turn life’s obstacles into learning opportunities. At a young age, her sister taught her a very important lesson that would stay with Meredith for the rest of her life: “If you want something done, do it yourself.”

When Meredith learned that there were many environmental issues that were disproportionately impacting people of color, she decided that she had to do something about it. Now she is a senior at Humboldt State University, California, finishing her degree in environmental policy with a minor in philosophy. Over the years, Meredith also developed a passion for grassroots organizing and political activism. She canvassed for statewide environmental causes and was a legislative analyst intern for the Northcoast Environmental Center. Most recently, she became a part of the Associated Students Lobby Corps, lobbying on state bills affecting immigrant students. She has also begun a grassroots campaign against pouring rights at Humboldt State. On the weekends, she spends time doing ecological restoration on the Humboldt coast.

As a CHCI Intern, Meredith wants to gain first-hand experience in the policy-making process. She wants to learn about legislation and Congress so that she can be an effective policymaker one day. She believes that this experience will help pave the way for her to reach her aspirations of becoming a leader in environmental justice for marginalized communities in the United States.