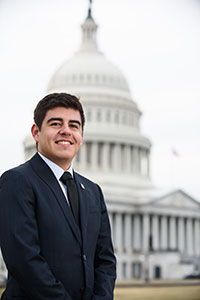 Michael Herndon grew up in an immigrant household in Omaha, Nebraska and is the youngest of three. His mother came to the United States from Mexico City in 1994 in search of a better life for her children. Growing up, both of Michael’s parents worked multiple jobs to support their family, teaching their kids the value of hard work and sacrifice.

Michael is double majoring in Political Science and International Studies and minoring in Chicano Latino Studies at the University of Nebraska at Omaha. He is interested in foreign affairs and aspires to be a United States ambassador one day. On campus, Michael is an honors student and holds multiple chairs for his fraternity, Sigma Lambda Beta.

Michael is a part of an accelerated graduate program at UNO and is planning on finishing his MS in political science in 2020. Afterwards, Michael wants to take a year off to do research or travel and then go back to school to pursue a Ph.D. or a MPP. As a CHCI intern, Michael hopes to learn more about the inner workings of Congress while also meeting an amazing network of ambitious Latinos.