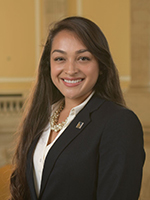 Placement 1: U.S. Agency for International Development, Bureau for Latin America and the Caribbean

Michelle Duarte was born and raised in Buena Park, California. She is a daughter of Salvadoran immigrants and the first in her family to graduate college. Michelle earned her B.A. in ethnic studies from the University of California, Berkeley. Both her education, whether that was inside or outside the classroom, and her personal experiences have given her the language and courage to fight against the violence women face domestically and abroad.

As an undergraduate, Michelle interned at the Bay Area Legal Aid where she assisted the attorneys and staff of the Domestic Violence/Sexual Assault Prevention Unit with their family law, restraining order, and immigration cases. Through this experience, Michelle was able to analyze and conduct screenings of immigration cases to determine what immigration relief survivors of domestic violence, sexual assault, and eligibility of other serious crimes. In addition, she had the opportunity to work directly with survivors in a local Bay Area crisis center by assisting them complete restraining order proceedings forms.

These experiences working with survivors helped her see the strengths and areas in need of improvement to more effectively address gender-based violence. As a CHCI Public Policy Fellow, Michelle seeks to enhance her knowledge of the policies surrounding gender-based violence and ways in which we can ensure that the needs of survivors, particularly Latina immigrant women, are at the forefront of policymaking.