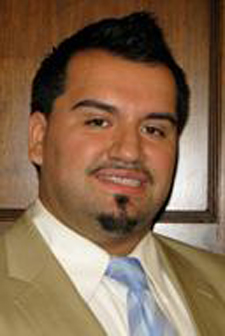 The summer I spent in the CHCI internship really opened my eyes to many things, both politically and personally. Immediately upon returning to DePaul that fall, I began the process of becoming a Brother of Sigma Lambda Beta International Fraternity, Inc., due in part to some of the people I met during the internship. The following two summers after the CHCI internship, I interned for First Lady Hillary Clinton’s Senate Exploratory Committee and then the full-fledged campaign. I also became a resident advisor at DePaul, and when I finished my undergraduate degree in 2002, I initially moved to D.C. to pursue a career in higher education, working at the George Washington University and George Mason University. The capitol dome, however, pulled me back to the Hill. I started as a staff assistant for Congresswoman Barbara Lee, and served as legislative correspondent and legislative assistant in her office before joining the CHC staff.

In those eight weeks a wealth of knowledge was shared with us. Whether it was from the staff in the offices we were placed in (in my case, my congressman at the time, Luis Gutierrez), the Members themselves, our fellow interns, or the meetings with various other leaders, we were given a crash course on how things work and how to get things done. The experience really opened up my mind on ways I could be involved to help other students and the Latino community at large. Once I was back on the Hill as a staff assistant, I believe the CHCI experience gave me the knowledge I needed to be successful and excel.

One way I have stayed involved has been through my fraternity. Community service is one of the principles of the Brotherhood, and we live up to the principle in many ways. We participated in the University’s Annual Service Day, we’ve conducted service events as part of our national meetings and retreats, and I’ve encouraged members who have joined after me to really get involved with community service at various levels. When I can, I personally give my time to helping various groups and organizations.

I wish I had kept a journal. Looking back, I wish I could remember more of the details of the things we did, but overall, I think a journal would help someone continue to appreciate their experience for many more years to come. I also encourage classes of CHCI participants to formalize their association beyond the program, by being engaged with the Alumni Association and creating the means for them to stay in touch with each other. Lastly, they must pay it forward. They need to go back to their schools and communities and spread the word about the programs, and once they are in the professional world, give back to CHCI both financially and with their presence at CHCI events.

Since a very young age, in high school, I have wanted to run for office. In high school, I had the opportunity to run for our local school council, and also to serve on the Chicago School Board of Trustees. In a conversation I had with Congressman Jesse Jackson Jr. back then, he told me that “there is no greater public service then to serve your community in elective office.” My internship with CHCI and the experiences that the program opened up for me have greatly reinforced that. So within the next 5-10 years, I hope to run for office representing the people of Chicago, IL, in some capacity, be it locally, state-wide, or at the federal level.