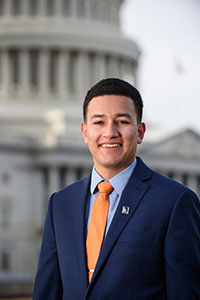 Miguel Patino was born in Medellin, Colombia and immigrated with his mother and sister to the United States in 2001 to reunite with his father. He grew up in Elizabeth, New Jersey. In 2015 he graduated from Union County College with an associate’s degree in liberal studies, and enrolled at American University in Washington D.C. to study political science.

During his time in DC he worked at American Honors, an honors program for community colleges, as an alumni coordinator. He also interned at the United States Department of Agriculture (USDA), where he worked for the Office of Advocacy and Outreach (OAO) and the National Organic Program (NOP). At OAO he performed mainly clerical work, answering phone calls and inputting information on spreadsheets, and at NOP he translated correspondence from Latin American countries and inputted public comments on regulations.gov.

Miguel is interning with the office of Albio Sires (D-NJ-8), who represents Miguel’s hometown of Elizabeth, NJ. Miguel is excited to learn more about his district and how decisions in Congress affect his hometown.