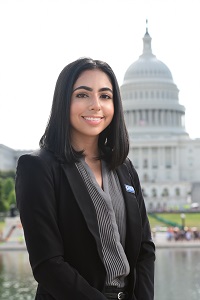 Miranda Valentina Barbosa was born in Trenton, NJ to two, proud Guatemalan immigrants. After her parents divorced when she was six, she lived with her mother—a hardworking, independent woman who has made her into who she is today. A rising senior at the University of Richmond, Miranda has dedicated her college career to creating and fostering a sense of community among Latinx students on campus. Aside from her role as co-president of the Solidarity Organization for Latinx Students, she strives to help Latinos in the greater Richmond area through a mentorship program called the Scholars’ Latino Initiative. The program aims to get Latino high school students into college regardless of their immigration status.

As a Bonner Scholar, Miranda spends at least ten hours each week volunteering at a free clinic that primarily serves undocumented Latinos. At the clinic she discovered that she could combine her love of science and her love of service in a way that could help people like her family, which led her to major in Healthcare Studies and Biology. Growing up, she was usually the interpreter for her grandmother during her health appointments and, though her grandmother has been able to access care, she has seen how difficult it has been for her uninsured and/or undocumented friends and family to do the same. As a CHCI intern, she is eager to learn more about healthcare and immigration policy and the way the two interact. She looks forward to gaining more insight on the political process because healthcare reform is needed, especially for those that have been excluded or failed by the system. After graduating, she hopes to work toward a Master’s in Public Health.