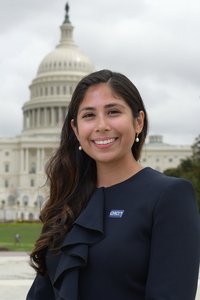 Miranda was born and raised in Cicero, Illinois, a western suburb of Chicago. She is proud of her Mexican-American heritage as the granddaughter of Mexican immigrants from San Luis Potosi. She is the first lawyer in her family, initially earning a Bachelor of Arts in classics and political science from College of the Holy Cross, and then a Juris Doctor and Master of Business Administration from Northern Illinois University College of Law and Business, respectively. As a young woman of color, Miranda’s academic and professional experiences drive her passion to work on the creation of equitable and inclusive policies that support the advancement of the Latina/o community and other underrepresented communities in all facets of leadership.

At Northern Illinois University College of Law, Miranda was elected by her peers to serve as the first Latina president of the school’s Student Bar Association. In this role, she managed budgetary oversight of law student activities as well as organized and led student events. Miranda was also elected by peers across the United States to serve as the 2017-2018 Director of Policy Initiatives for the National Latina/o Law Student Association, a student-led organization dedicated to assisting Latina/o law students navigate their law school careers.  Beyond her law school leadership, she was recruited to work in the ‘get out the vote’ phase of the 2018 Illinois gubernatorial election. She was then selected to join the Obama Foundation’s inaugural Community Leadership Corps, where her leadership team focused on designing a financial literacy and college readiness program for high school students who would be first-generation college students in her hometown of Cicero, Illinois. She credits much of her passion for organizing and social action to the Community Leadership Corps program, her parents, and her law school professors.

As a CHCI Facebook Graduate Fellow, Miranda hopes to build connections with other young Latina/o leaders and strengthen her policy research and writing on how the implementation of artificial intelligence in business operations will impact the Hispanic labor force in the United States. During her fellowship, Miranda has been given the opportunity to serve as a legal counsel in the Senate and will focus her policy work on campaign finance reform and immigration. Her ultimate career goal is to increase the presence of Latina attorneys on the partnership track in corporate law and eventually start her own legal tech firm.