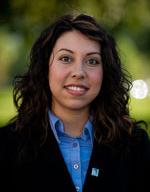 Monica Bautista is a fourth-generation Mexican-American who grew up in Joliet, IL. She began pursuing her Bachelor of Science in biology at Loyola University – Chicago, but soon realized biology was not her passion. She then moved to Hawaii where she began working with families in the Marine Corps.

Monica moved from Hawaii to Oregon, where she resumed her studies and earned a Bachelor of Science with Latin honors in community health education from Portland State University.

Monica’s classes exposed her to public health, but public health did not become her passion until she interned with the Multnomah County Health Department’s Environmental Health Section. During this internship, Monica worked with the Lead Poisoning Prevention Program providing education to Early Head Start families. She also worked with the Healthy Homes Program analyzing housing policies and their effects on health.

Monica served as Student Advisor with the Chicano/Latino Studies Program at Portland State University, which allowed her to work closely with the Latino community on campus. After graduation, Monica was a Hispanic Serving Health Profession Schools Summer Trainee with the Health Resources and Services Administration.

Monica continues to work with Marine Corps families and is interested in veterans’ health, women’s health, and eliminating health disparities.

As a CHCI Public Policy Fellow, Monica hopes to gain knowledge and skills about policy making, which she can use to develop policies that create healthier communities in the United States and abroad. She plans to earn a dual M.P.H./J.D. degree in the future and work in Health Law and Policy.