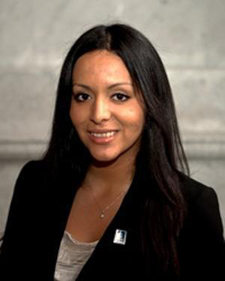 Current Position/Organization: Head of Public Policy and Communications, Homejoy. Previously, worked for the Executive Office of the President, OPM and the Senate.

The most difficult decision I ever made was to leave home. I was born and raised in Peru and due to our economic situation, I was separated from my parents for a few years when they immigrated to the United States. I was finally reunited with my family when I was 10 years old – deciding to go away to college and later D.C. broke my heart – but an experience like that teaches you to think about those you love before yourself and for me that’s my family and my community.

My personal experience led to my passion in advocating for issues that affect low income, disenfranchised communities. Immigration, education, housing and youth incarceration are issues that were close to my heart so I became an advocate at a very young age. This passion led me to an internship in Washington D.C. where I worked along other CHCI fellows who encouraged me to apply. Immigration and in particular, family separation, is what I cared about the most, so I knew that Washington D.C. was the place to go if I wanted to have high impact at an early stage in my career. I never thought I would be selected, but with the help of my mentors I was offered a spot in the class of 2010. CHCI is “the great equalizer” for Latino Youth in Washington D.C., without the help of CHCI I would have never afforded to start my career in D.C. politics.

My fellowship in Senator Reid’s office led to a job offer to become the Senate Majority Leaders Press Secretary for Hispanic media at 21 years old. I was asked to go work for President Obama’s reelection campaign where I organized a group of Latino communicators and ran a regional media operation. Following our victory in 2012, I ran Hispanic media for the President Inaugural Committee and later became Press Secretary at the Office of National Drug Control in the Executive Office of the President. I’ve held other communications roles in the Administration such as Deputy Director of Communications at the Office of Personnel Management and helped run the ACA regional media enrollment program at the White House. I recently realized my dream of moving back to California and joined Homejoy – a startup based out of San Francisco- as Head of Public Policy and Communications.

After being away from home for so long I’m currently focused on giving back to my family and my immediate community in the Bay Area. Recently, I joined the Advisory Board of Inclusv.com as a volunteer. This effort is seeking to encourage young people, especially Latinos, African Americans, APPI, and other underrepresented communities to jump on the 2016 campaign trail.

I recently moved back to California to pursue a career in the tech sector. I’m looking forward to supporting efforts that seek to offer economic mobility and opportunities for entrepreneurship for working families, especially Latinos and immigrants.