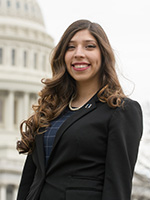 Nezly Silva is a first generation Mexican-American raised in Springdale, Arkansas, pursuing a bachelor’s degree in social work and Latin American/Latino studies at the University of Arkansas. In order for Nezly and her brothers to have greater opportunities, Nezly’s parents uprooted their lives in Hidalgo, Mexico to move to the United States. Nezly is the first in her family to attend a four-year university and remembers her parents’ sacrifice as her motivation to succeed.

Nezly is a student in the Honors College at the University of Arkansas. She was awarded a research grant in order to study the social challenges and opportunities that come with integrating Latino immigrants into life in the southern United States. Her original research was presented at the sixth annual conference on Immigration to the United States South. Nezly is the president of the Beta Beta Chapter of Hermandad de Sigma Iota Alpha, Inc., the first Latina-based sorority in the state of Arkansas, and was also named a Truman Scholar finalist and a Senior of Significance for the Class of 2017.

As a CHCI Intern, Nezly plans to expand her knowledge of the legislative process, fortify her leadership and advocacy skills, and broaden her personal and professional network. In the future, Nezly plans to take a gap year to gain experience working for a nonprofit or agency that protects immigrant rights, and later pursue a Juris Doctor or Masters in Public Policy.