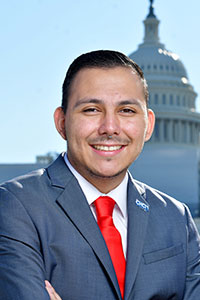 Nicholas was born and raised in Phoenix, Arizona, and comes from a mixed-status family. His father was born in Mexico and grew up in the United States undocumented. At a young age, Nicholas was exposed to the harsh effects of anti-immigrant legislation on Latinos while growing up in the West Valley of Phoenix. Though his community faced adversity, it inspired Nicholas to get involved with advocacy and politics.

Currently, Nicholas is triple majoring in Justice Studies, Political Science, Transborder Chicana/o and Latina/o Studies as a junior at Arizona State University. As a first-generation student, he understands the importance of education and yearns to take advantage of every opportunity available. Within the past year, as a student fellow, Nicholas has advocated for in-state tuition for the undocumented community in Arizona through a non-profit organization recognized as Aliento. Upon completing his undergraduate degree, Nicholas hopes to obtain a Juris Doctorate Degree and pursue a career in law. His ultimate career goal is to work in public service and defend those who are underrepresented.

As a CHCI Intern, Nicholas hopes to gain further knowledge of the legislative process and acquire insight into immigration policies. He anticipates understanding how the intersection of law and policy affects minority communities.