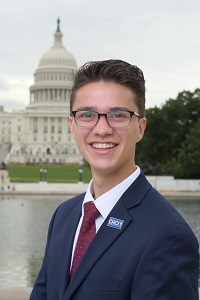 Nicolas was born in Medellin, Colombia and immigrated at the age of two to Atlanta, Georgia where he was raised and educated. As a global citizen, Nicolas understands intersectionality and the importance of comprehensive global collaboration.

Nicolas is currently a junior at Kennesaw State University where he is majoring in International Affairs with a concentration in Diplomatic and International Service. He is also pursuing a minor in French and Francophone Studies as well as a certificate in Intelligence and Homeland Security. Nicolas emphasizes his research on the Middle East and Africa and has served as the captain of the award-wining simulation teams at his university, such as the Model Arab League and the Model African Union teams.

Nicolas enjoys learning foreign languages such as French and Arabic because he values communication and realizes its importance in diplomacy. He also volunteers with a variety of communities, such as the Latino community, the Arab-American community, and the refugee community in Clarkston, Georgia. Nicolas realizes that supporting those adjacent to him improves the quality of life for all and actively works to support diversity in Atlanta.

After graduating, Nicolas hopes to attend graduate school and later become a Foreign Service Officer in order to help preserve the lasting relationships between the U.S. and foreign governments. As a CHCI Intern, Nicolas intends to fortify his skillset, expand his network, and learn how to better address the needs of the Latino community. He also hopes to learn about the construction and implementation of foreign policy.