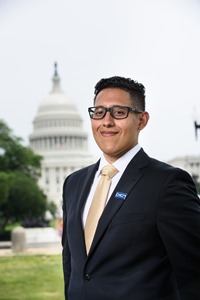 Nicolas Unzueta Corral was born in a small city in Durango, Mexico, living there for the first five years of his life, until his parents divorced. He immigrated to the United States with his mother after, where they overstayed their visa. As he grew up, Nicolas focused on academics to mitigate the looming threat of deportation, with his mother working hard to provide for him. Her determination inspired him to one day make her proud for all her sacrifices, and made him realize that he had to seek out the resources he needed to accomplish his goals.

In June 2012, he saw a glimmer of hope as he attained DACA status and was finally able to seize the opportunities previously unknown to him. Equipped with the tools to shape his future to maximize his potential, Nicolas sought higher education and is currently a sophomore completing his associate’s degree in business at the College of Southern Nevada. He plans to pursue a bachelor’s in marketing with a minor in psychology. Upon the completion of his degree, Nicolas hopes to create a network of small business owners and raise awareness in his community of the opportunities around them.

As a CHCI Intern, Nicolas hopes to build his resilience and ask tough questions when they need to be asked. He hopes to build his networking skills to link same-minded individuals to focus on the issues and hone his professional skills. Nicolas knows that through his diligence he will develop the leadership qualities that will help him serve the Latino community.