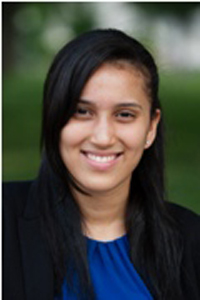 July 2014 Junior Alumnus of the Month

A native of the Dominican Republic, Odett Salcedo came to the United States with her parents four years ago seeking educational opportunities. During this time, Odett has excelled academically, served in leadership roles in her school and local community and is eager about her future at Bard College located in Annandale-on-Hudson, New York.

Odett graduated earlier this spring from Gregorio Luperon High School for Science and Math in New York City where she challenged herself to take rigorous academic curriculum including several Advanced Placement courses in Physics, Calculus, and Spanish Literature. While at Gregorio Luperon, Odett earned the Principal’s Honor Roll every quarter and was ranked 1 out of 83 students in her graduating class. Her excellence in academic achievement has helped her earn various scholarship awards and acceptance into 13 public and private colleges and universities.

In addition to participating in CHCI’s R2L NextGen program in 2013, Odett has sought other educational and leadership enrichment programs, including the Princeton University Summer Journalism Program and Network for Teaching Entrepreneurship – NYC Generation Tech. Additionally, Odett avidly pursues opportunities to serve her community including greeting and translating for visitors at the National September 11th Memorial and Museum.

During Odett’s participation in CHCI’s R2L NextGen program, she met two college students who also hailed from her neighborhood, New York’s Washington Heights, and were interning on Capitol Hill at the time – including a summer CHCI Congressional Intern. These encounter was particularly impactful for her. Says Odett, “100% of my community is made up of recent immigrants and I see that many of them drop out of high school to purse minimum wage jobs or return to the Dominican Republic. Meeting these interns reinforced the notion that I can also make it out of my community and continue to do good for myself and others through education.”

Odett’s short-term goals include earning a Bachelor’s Degree in Mathematics within three years from Bard College and continuing onto Columbia University and applying to the Financial Engineering Program. She aspires to use her passion for math into a career in economics. Moreover, she hopes to serve as a role model for other girls interested in the STEM fields.

CHCI is proud to have Odett be a part of the CHCI Familia!