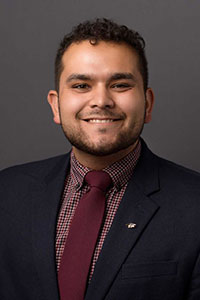 Pablo Balcazar (He/Him) was born in Berwyn, IL, and raised in Northwest Indiana. He is the son of Mexican immigrants who relocated to an area with little support for families like his. Nevertheless, they worked tirelessly to ensure that their children would have an education and taught them that even the most daunting barriers could be surpassed with hard work and persistence. His family’s experience led him to develop an interest in supporting immigrant families in areas that underserve immigrant communities.

Pablo graduated from Purdue University with a double major in Political Science and Sociology and minors in Human Rights, Global Studies, and Latin American and Latino Studies. While on campus, he became a Co-Founder and eventually President of Purdue Immigrant Allies, a student-led immigrant advocacy organization that collaborated with other student organizations and community partners to advocate for immigrant communities and dismantle misconceptions placed on them. Pablo went on to become a Legal Intern at Mil Mujeres Legal Services and eventually a Student Clerk at Purdue’s International Student Service office. In both experiences, he worked under the supervision of an attorney while organizing immigration documents for visa applicants. The accumulation of his professional experiences, student leadership, and research at Purdue University resulted in him being awarded the Somos Purdue Award for a strong work ethic and a commitment to excellence while on campus.

As a CHCI-New York Life Public Policy Fellow, Pablo strives to strengthen his problem-solving and leadership skills while learning more about the policy-making process and ways to make it more accessible to communities left out of the conversation.