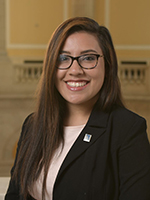 Born in Bogota, Colombia Paola is a first generation American. She relocated with her parents and her younger brother to the United States when she was 10 years old as a refugee. Paola went on to receive the Goizueta Scholarship in 2012, and thus was able to attend and graduate from Georgia State University in May 2016 as the first of her family to earn a degree from a University in the United States.

Paola has conducted research on themes of higher education, happiness economics, local finance, and state funded merit scholarships. She is also active in advocacy and immigrants’ student rights. In 2016, Paola and some peers at Georgia State University gathered to establish an entirely student funded scholarship titled “Continuing the Dream,” which was founded to serve a high-achieving undocumented student. In August 2016, the first Continuing the Dream Scholar was selected, and awarded.

As a CHCI Public Policy Fellow Paola hopes to utilize the resources available in Washington, D.C. to pursue a career in international economic development. As her first time in the policy-making capital of the world, Paola aspires to use her research experience to continue to advocate for immigrant rights from Capitol Hill, and to use her voice and passion to fight for the interests of all Latinos and Latinas in the United States.