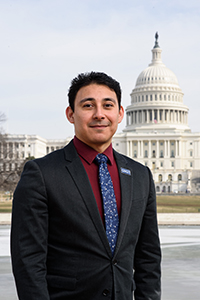 Richard Vega comes to Washington D.C. from Austin, Texas. During his four-year contract with the US Army, Richard earned two Army Achievement Medals. In 2017 he was elected Student Body President of the 6th largest community college district in the nation, Austin Community College. As president he advocated for the improvement of public transportation, making menstruation products available in all restrooms, compensating student volunteerism with class credit and pay, and refining student services and facilities. Additionally, as President for VALOR, a veteran student organization, he built an organization to help service members transition from the military into civilian life as community college students.

In December 2018, Richard graduated from Austin Community College with an Associate of Science in Engineering. He is an aspiring mechanical engineer with hopes of transferring to a prestigious engineering program for the fall of 2019. Richard hopes to develop machines that will improve the lives of people and allow for humanity to venture into space. In the process, he would like to encourage responsible automation which does not disenfranchise the working class.

As a CHCI Intern, Richard looks forward to learning about the functional intricacies of government, meeting those who have dedicated their lives to public service and participating in discussions to identify common ground and lead towards improving the Hispanic community and the lives of all Americans.