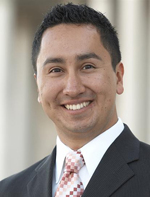 Through his CHCI Fellowship placement with the Center of Global Development, Robert spent the month of March in Liberia working in the Office of the Minister of Finance, where he worked on Liberia’s Poverty Reduction Strategy (PRS) paper. Through his work on the PRS, he also helped construct “consultative workshops/outreach sessions” on the PRS. Robert also spent time working on the Ministry of Finance’s Quarter 2 Fiscal Outturn Report.

Robert was born in Fresno, California, and raised in the small town of Porterville, California, both in the southern Central Valley. Robert recently graduated from Stanford University with a B.A. with Honors in Political Science. While at Stanford, Robert worked as a research assistant, where he researched the advancements and setbacks of democratic development in Latin America. This research was expanded and turned into an honors thesis on human rights violations in southern Mexico during Mexico’s transition to democracy.

Robert volunteered for the student group Barrio Assistance, a tutoring/mentoring group that targets at-risk Latino/a youth in East Palo Alto. He was also a member of the Society for Entrepreneurship in Latin America, a group geared towards promoting entrepreneurial relationships between the U.S. and Latin America as a means of fostering socioeconomic development. In the spring of 2006, Robert worked as an intern at the NAFTA/Trade Office of the Mexican Embassy in Washington, DC; and in the summer of 2004, he worked as an intern at O.L.A. Raza Immigrant Rights Center in his hometown of Porterville. Both positions highlighted the complex economic, environmental, and human rights issues surrounding globalization and the evolving relationship between the U.S. and Mexico