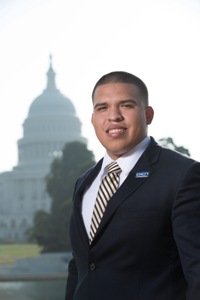 Robert Molina was born and raised in Bellmore, New York, and enlisted into the United States Marine Corps after graduating from high school. While enlisted, he served tours overseas in Japan and South Korea, all experiences that sparked interest in national security.

As a CHCI Public Policy Fellow, Robert wants to better connect with the Latino community, both in the U.S. and abroad. He has a passion for serving underrepresented communities, stemming largely from his pride in being a first-generation and son of two immigrants. After his fellowship, Robert intends to go to law school.