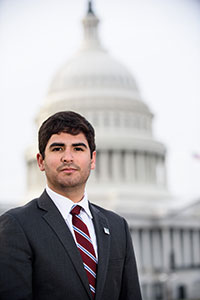 Roberto J. Nava Alsina was born in Newark, New Jersey to a Puerto Rican mother and a Peruvian father. The opportunity to make a change in Puerto Rico’s current economic and social problems motivates him to continue his education and work towards helping his beloved homeland. Roberto is a senior at the University of Puerto Rico majoring in Political Science with emphasis in Government, Law and Public Policy.

On campus, Roberto has served as vice-president of the General Student Council and was involved in the foundation of Pulso Estudiantil, the campus student newspaper. Roberto has interned for Congresswoman Eleanor Holmes Norton (DC), where he was further inspired to learn more about Congress, the Federal Government and its relationship with Puerto Rico.

As a CHCI intern, Roberto looks forward to developing legislative research skills, broadening his professional network and gaining a deeper understanding of the federal government. Upon graduation, Roberto plans to pursue a Master’s in Public Administration and looks forward to using his skills in order to emphasize the importance of public policy analysis and research in the improvement of our government.