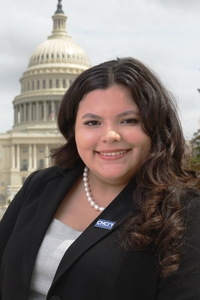 Sabrina was born and raised in the Rio Grande Valley, the southernmost part of Texas that borders Tamaulipas, Mexico. Her parents instilled in her the importance of education and provided her with undying support throughout her life. Sabrina was the first in her family to pursue higher education and she received a Bachelor of Arts in political science from St. Edward’s University in 2019.

The choice to pursue a career in public policy was not easy; no one in her family, circle of peers or mentors had ever ventured into the realm of politics. Determined to gain experience, Sabrina made calls to the offices of her local representatives asking for a chance to intern in their district office during the summer of 2017. That is when she landed her first position as an intern for Texas State Representative Terry Canales, moving to Austin, Texas for the summer for the 2017 Special Session and working closely with Rep. Canales’ chief of staff. Working in Rep. Canales’ office gave her an inside look at how the political process works and encouraged her to pursue other opportunities to gain experience in politics and government.

After interning for her local state representative, Sabrina took on various roles that cemented her interest in public policy. She worked as a field organizer for a city council race in Austin, Texas, canvassing hundreds of doors and encouraging constituents to vote and remain politically engaged. Sabrina also interned for Texas CASA’s Public Policy team, where she worked to advance transformative legislation advocating for the well-being of children in foster care. Along the way, she made meaningful connections and gained mentors that were instrumental in furthering her leadership skills.

As a CHCI Public Policy Fellow, Sabrina hopes to cultivate her leadership abilities and gain the skills necessary to advance creative public policy solutions. Sabrina hopes to apply her knowledge and abilities to ensure students receive quality education no matter their race, economic status, or ability.