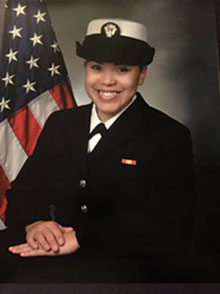 March 2016 Junior Alumnus of the Month

Sabrina Moreno, a proud Dominican, grew up in the Bronx, New York. Although she faced challenges in high school, she persevered and is now a sophomore at the State University of New York College at Plattsburgh where she is pursuing a degree in criminal justice. After completing her first year of college, Sabrina joined the United States Navy as a way to pursue her goals and give back to her community and country.

Since graduating from boot camp, Sabrina has been training for her new job in the engineering field, and will be deployed in January 2017. Once she returns from deployment, Sabrina’s plan is to continue her education online and work towards becoming a Petty Officer in the Navy. Through her time in the Navy, Sabrina has learned the importance of being a strong leader, speaking up and giving other Hispanic students a voice.

In the future, Sabrina hopes to finish her military career with the Navy and pursue a second career as an FBI agent, which is something she has aspired to do since she was young. She is thankful to CHCI and the R2L Nextgen program for not only teaching her the intricacies of the government, but also showing her the importance of speaking up and fighting for what she believes in. Sabrina said “I would like my fellow R2L NextGen students to know that they still have a lot to achieve in life. Never give up fighting for what you believe in. We are all young and still have a voice. Never lose that voice!”

Since her CHCI experience, Sabrina has accomplished a lot for herself and for her community. The CHCI familia is incredibly proud of her, and looks forward to see the great influence she continues to have in her community.

To support dynamic students like Sabrina and CHCI’s programs such as R2L NextGen, please visit: http://www.chci.org/donate.