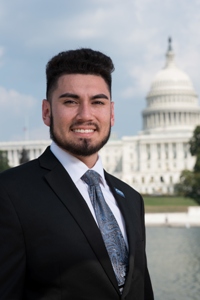 Salvador Salazar-Cano is a policy advocate, researcher, and spoken-word poet from the Pacific Northwest. Born in Jalisco, he grew up in rural Oregon, Idaho and Washington State to a migrant family. As a community college transfer and first-generation college student, Salvador knows firsthand the trials and tribulations that come with growing up in a household with limited resources. He is grateful for the support his family’s given him to pursue his community and academic endeavors despite adversity.

Because of his community centeredness, Salvador has accrued professional experiences in education, healthcare, and social service. While he’s dedicated to community service, his mission is to amplify the voices of immigrant communities in a just and equitable manner. While in community college, he organized DACA workshops to bring free legal counsel to hundreds of DACA applicants in rural Washington State.

With a full-ride scholarship, he is currently working toward his BA in Society, Ethics and Human Behavior with a minor in Human Rights at the University of Washington Bothell. As a student advocate, Salvador has represented 130,000 students with the Washington Student Association and has influenced several pieces of legislation into law including the Washington State Dream Act 2.0, Washington Voting Rights Act and pre-registration for 16 & 17-year old potential voters in Washington. Because of that, he recently earned the 2018 Washington Campus Compact Presidents’ Civic Leadership Award.

In the future Salvador plans to obtain his MPP/JD to work on the intersection between criminalization of communities of color and immigration, and on the educational advancement of immigrant student populations. As a CHCI intern, his goal is to symbiotically learn from his peers, contribute, and learn more about the federal legislative process.