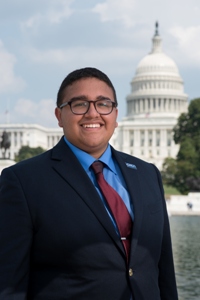 Samuel Parada was born in Baldwin, Long Island, New York. As a son of immigrants from a young age, Samuel learned the importance of working hard, commitment to education and the importance of being able to speak Spanish. Samuel’s parents worked multiple jobs cleaning houses, office building, and working at country clubs in maintenance. After the 9/11 terrorist attacks, Samuel’s parents sought a better life from the fear in New York, moving to Houston, Texas, where Samuel has lived most of his life.

Samuel is majoring in Political Science and minoring in English at the Prairie View A&M University in Prairie View, Texas. He’s interested in public policies that affect the Latino community such as wage disparity, voting rights, education, and naturalization. While interning for the National Association of Latino Elected and Appointed Officials (NALEO) he researched voting rights for Spanish speakers and The Census Citizenship Question coming up in 2020.

On campus, he is team captain of the Pre-Law Society’s Mock Trial team and current dean’s list student. Samuel plans of graduating in Summer of 2019 and attend Law School in Washington D.C. As a CHCI Intern, Samuel hopes to gain a better understanding of the complicated legislative agendas of Congress and learning more about Latino causes on Capitol Hill.