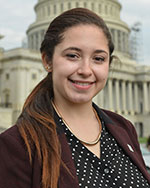 Sarah Valentina Diaz is a first generation Colombian-American born in Boston. The transition from a charter school in Cambridge to a private high school in the same city gave her a firsthand experience with the major inequities in living conditions and education that could exist even in areas of close proximity. An interest in social justice led her to pursue community health as one half of her double major with cognitive brain science for her undergraduate degree at Tufts University.

During her academic career, she supported and contributed to the Association of Latin American Students (ALAS) which sought to provide a support network for Latina/o students on the Tufts campus, and was later elected as the public relations officer. Sarah also became an active member of the Student Health Organizing Coalition (SHOC), which sought to voice the interest of students on campus in the health insurance market. She focused on working on various public health research projects, such as the Community Assessment of Freeway Exposure and Health Study at Tufts University School of Medicine, where she helped recruit and interview Spanish speaking residents.

As a CHCI Public Policy Fellow, Sarah hopes to gain a greater understanding of how to develop and implement population health policy. She feels excitement about seeing the political process firsthand.