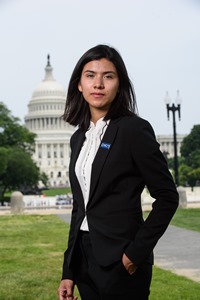 Shannon Rodriguez was born in El Paso, Texas, but she grew up in the border city of Juarez, Chihuahua, Mexico, where she lived until she graduated from high school. While in Juarez, Shannon was only fluent in Spanish, and had only crossed the border very few times. Shannon knew she wanted to attend college, but knew that in Mexico she would not have that opportunity. Shannon made the tough decision to leave her family behind and start from zero in a foreign country in order to pursue a college education.

Although, it was not easy, Shannon started her higher education at Doña Ana Community College in Las Cruces, New Mexico while simultaneously working full time positions. There, Shannon perfected her English and obtained an Associate of Arts as a meritorious graduate. After that, Shannon transferred to New Mexico State University to pursue a four year degree, and is currently in her senior year majoring in Philosophy and two supplementary majors in Linguistics and Law and Society. She is also part of the Honors Debate Team of her college, and has participated in the Intercollegiate Ethics Bowl as well as in the National Bioethics Bowl.

Shannon plans on pursuing a law degree upon graduating with honors from her institution, focusing on immigration law. Shannon herself has been an immigrant, and while she was privileged to have been born in the United States, she understands the struggles that people in her community have to face every day due to their status. As a CHCI intern, Shannon wants to become more acquainted with the policy making process and develop her leadership skills to give back to her community while being surrounded by strong Latino leaders.