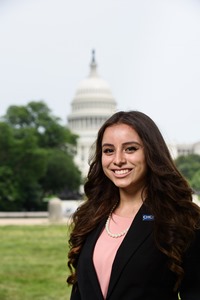 Shazia Olivares was born in Miami, Florida years after the United States granted her parents asylum from the Nicaraguan Sandinista Revolution. Her father joined the United States Marine Corps when she was five and she has moved over 12 times. Shazia’s parents had her as teenagers, and though she faced financial constraints, she became the first in her family to seek higher education and obtain a full ride.

Shazia is a senior at the University of Kentucky (UK) and is pursuing her Bachelor’s Degree in Political Science. She has been a group leader in a campus fitness organization, and is a peer instructor for a freshman course.  While representing UK, Shazia taught English to children in Nicaragua as a volunteer and a translator, which inspired her passion for socioeconomic issues such as women’s rights and education. She also studied abroad in Spain and Morocco —alongside lawyers and police enforcement— with a focus on civil liberties and justice systems. Shazia’s passion for law and politics has led her to successfully maintain a 4.0 GPA, while taking 21 credit hours and interning 24 hours a week at a law firm.

As a CHCI intern, Shazia looks forward to the ample opportunities to conduct research, learn about the inner workings of U.S. politics, connect with like-minded individuals, and apply knowledge learned in the classroom. She hopes this experience will beget future participation in politics, and she plans on obtaining a J.D. to represent marginalized communities.