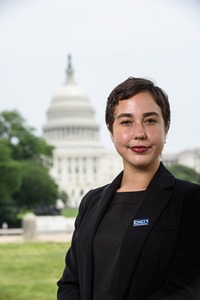 Born in Ishøj, Denmark, Sissi immigrated to Miami, FL in 2004 at the age of 7. As a Latina immigrant of both Danish and Cuban decent, she came to the realization at a very early age that there are limited institutional opportunities offered to those coming from various marginalized groups that exist on the fringes of our political and social communities. This realization led her to study Political Science with a minor in Global Studies at Florida Gulf Coast University, and upon completing her degree she will be the first in her family to graduate from college.

Since starting her undergraduate career, Sissi has immersed herself in activism and has sought to raise awareness on the faulty immigration system which exists in the United States, along with various other racial injustices and abuses which people of color are subjected to. She has served as President of the FGCU Amnesty International Chapter, President of FGCU International Organization, Co-President of FGCU for Dreamers, and Voto Latino Recruitment Chair. In addition to this, she has participated in actions and initiatives with United We Dream, Florida Student Power Network, Coalition of Immokalee Workers, Florida Immigrant Coalition, and various others organizations. It is her hope to continue onto law school upon graduation in the fall of 2018.

As a CHCI intern, Sissi is looking forward to connecting and becoming inspired by a new network of CHCI peers. She hopes to acquire greater experience and knowledge so as to further aid others, particularly the Cuban community, in becoming greater allies and activists in the pursuit of justice.