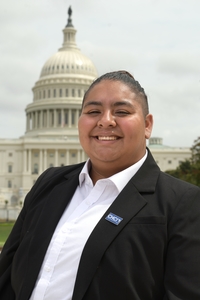 Steph Niaupari (They/Elle), an Ecuadorian and New Yorker, lives between two worlds, four languages, and the intersections of many communities. They are a proud child of an Ecuadorian immigrant mother and spent part of their childhood in Ecuador with family members.

Steph began their studies at Gallaudet University shortly after working at a Deaf K-12 school in Quito, Ecuador. While becoming proficient in their second sign language, they realized that in order to promote social change in the Latin American Deaf Community, they needed to prepare themselves. At Gallaudet, they became heavily involved in urban agriculture and nutrition. Through a local partnership with Cultivate the City, Steph founded the Community Supported Agriculture program on campus, allowing students to have access to reduced shares of locally grown, chemical-free foods. In addition, Steph’s commitment to food liberation and nutrition led them to create Planita Power, a Northeast Washington, D.C. collective committed to strengthening existing projects in urban spaces and providing tools to eliminate barriers to fair-food access for the Queer, Trans, Black, Indigenous, People of Color  (QTBIPOC) community.

As a result of their intersectional policy analysis work with Fundación Nellie Zabel, an organization in Chile run by and for Deaf women, Steph received the Liisa Kauppinen Award for Excellence in Policy Development and Research. Since graduating with their M.A. in International Development, they continue to promote gender inclusive community leadership by boosting the public and organizational profile of leaders who fall outside of the binary.

During their academic career, they supported and contributed to the Latino GLBT History Project (LHP), which seeks to respond to the critical need to preserve Latinx LGBTQ History and promote tolerance and acceptance of the community in Washington, D.C.  Steph was later elected as the Vice President of the organization during their graduate studies. As current Vice President, Steph leads the Development & Outreach Committee and is a key figure in the D.C. Latinx Pride planning process.

Steph’s primary career goal is to work on issues affecting systematically oppressed groups. As a CHCI Nutritional Health Graduate Fellow, they will continue to hone their research skills while gaining valuable insight and knowledge about the public policy process.