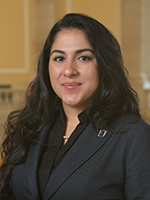 Stephanie Flores was born and raised in Guayaquil, Ecuador. She moved to the United States after graduating high school and joined the United States Navy in 2007. After serving in the military, she decided to pursue a college education at Old Dominion University where she earned a B.S. in business administration with a double major in economics and international business with a focus on Latin America.

While serving in the military, Stephanie served as a U.S. Navy translator for a humanitarian mission in South America, Central America, and the Caribbean. Serving in impoverished rural areas in Latin America to bring disease prevention education and community relief projects sparked a flame in Stephanie. She had a newfound desire to get a better understanding on resource allocation, and it motivated her to want to work with her community. As an undergraduate she served in the Hispanic and Latinos Unidos initiative to enhance the presence of the Hispanic and Latino community, and to raise awareness of issues affecting the Latino community through education, advocacy, and exchange of ideas on campus. She also served as the Director for a mentoring program through Stand Up for Kids, a non-profit organization that works with homeless and at-risk youth.

Stephanie is grateful to CHCI for giving her the opportunity to participate in the Public Policy Fellowship program. She understands the vital role of education, community building, leadership development, social justice, and civic engagement. As an active member of her community, she realized that public policy affects individuals in every aspect of their lives. Engaging in public policy work will allow Stephanie to gain valuable experience on how to address those issues she learned about while serving in the military, working with her community, and while attending college.