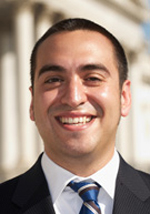 Stephen Perez is the Edward Roybal Public Health Fellow. His first placement was at the Health Resources and Services Administration (HRSA) in the Office of Minority Health and Health Disparities. Stephen worked on several issues during his placement at HRSA, including health workforce diversity, chronic care models for disease management, and HIV/AIDS.

Stephen attended many healthcare summits within the National Advisory Council on Nursing Education and Practice. He also participated in working groups within the U.S. Department of Health and Human Services which discussed issues such as human trafficking and tobacco use.

Stephen is currently placed in the Office of HIV/AIDS Policy within the U.S. Department of Health and Human Services. He currently directs the HIV/AIDS basic information content research as well as evaluates and writes portions of the AIDS.gov Web site re-structure project for the department. He is also responsible for assimilation and plain language translation of all the HIV/AIDS resources throughout agencies and the executive branch of the U.S. Government. Stephen facilitates collaboration and vetting of public HIV/AIDS information and Web content across other Health and Human Services branches, including the Centers for Disease Control and Prevention and the National Institute of Health. In addition, Stephen conducts weekly analysis of current HIV/AIDS legislation and policy as it relates to community level stakeholders.

Stephen received his Masters of Science in Nursing from the University of California, San Francisco, where he trained as an advanced practice nurse in the specialty area of HIV/AIDS. He is enjoys working in Washington and looks forward to a permanent position that will continue to allow him to blend his clinical knowledge with policy and programs as it relates to HIV/AIDS and other public health issues.

In his free time, Stephen enjoys volunteering at the Whitman Walker Clinic in Washington, D.C. as well as other local community organizations. He also enjoys watching CNN with his roommates, sleeping, and spending quality time with his CHCI colleagues.