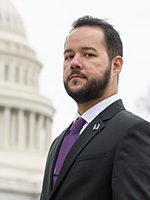 Ticiano Menezes was born in Brazil and immigrated to the United States in search of better opportunities. He left his family behind and began the journey on his own with the hope that one day he would achieve personal and educational success. From a young age, Ticiano’s parents were a major force in his life and instilled in him the values of determination, respectfulness, and hard work. He believes those teachings have played a major role in his accomplishments throughout his life.

Ticiano is pursuing a bachelor’s degree in economics with a concentration in business at Florida Atlantic University. He takes pride in being the first person in his family to attend college. In addition to attending college full-time, Ticiano works multiple jobs, supports his family, and volunteers with several organizations on campus including, Stop Hunger Now.

As a CHCI Intern, Ticiano looks forward to strengthening his leadership skills, increasing his knowledge in public policy and understanding of the inner workings of Congress. He hopes to dedicate himself to unifying different cultures and help others achieve their American Dream.