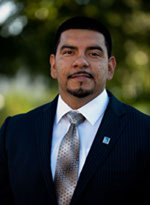 Tomas Robles, Jr. is a first-generation Mexican-American who was born in Tucson, AZ, and raised in Phoenix. He is a veteran of the United States Marine Corps, and he was the first person in his family to join the Marine Corps. He was also the first person in his family to graduate from a university; he graduated from Arizona State University with a Bachelor of Arts in transborder studies with an emphasis on immigration policy and economy.

Tomas became involved in politics after Senate Bill 1070, an anti-immigration bill that would have led to racial-profiling in Arizona, passed. Tomas became a community organizer with Promise Arizona – a nonprofit organization that promotes civic engagement and comprehensive immigration reform. At Promise Arizona, Tomas recruited, trained, and worked with volunteers to successfully promote civic engagement and voter registration in the South Phoenix area. Tomas was instrumental in helping Promise Arizona register over 13,000 new voters, the highest total an all-volunteer organization had ever accomplished in Arizona.

As a CHCI Public Policy Fellow, Tomas hopes to learn new and effective ways to change his community, and he hopes to gain a better understanding of the public policy process.