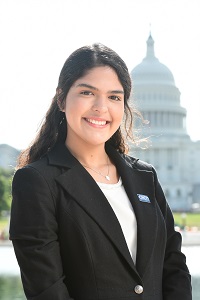 Vyanka is a second-generation Mexican-American coming from Brownsville, Texas, a small border town by the sea. As one of the first members of her family to leave Brownsville, Vyanka ventured out into Dallas, Texas in order to attend an all-girls boarding school, The Hockaday School. Her time in Dallas made her cognizant of how the legal system was not created equally for everyone and getting involved with the legislative system was the best way to change that.

A rising junior at the University of Miami, Vyanka is studying Political Science and Economics with some additional coursework in Public Relations and Business Law. Beyond her classes, she is a Resident Assistant (RA), a chair for the women’s symposium on campus, and she conducts research and reaches out to legislators as part of Rise, a non-profit that focuses on creating and extending the Sexual Assault Survivor’s Bill of Rights throughout the country.

She serves as a Hispanic Scholarship Fund scholar, a scholarship she developed interest in when she became a National Hispanic Institute alumna. As an alumna, Vyanka is dedicated to serving the future leadership needs of the global Hispanic community through cultivating public speaking skills, practicing constructive debate, and facilitating discussions about issues affecting the community.

As a CHCI intern, she hopes to see how the legislative process can work to reduce economic inequality as well as environmentally irresponsible actions. Additionally, she is excited to be a part of increasing the representation of minorities involved in public office.