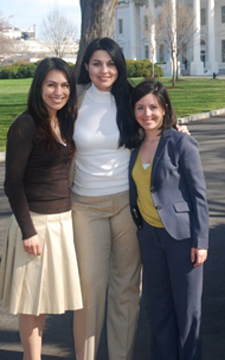 After I finished the CHCI fellowship, I moved back to California to work on a congressional race in the Inland Empire. After the campaign I became part of a seven person start-up team that brought City Year, the largest youth service organization in the country, to the city of Los Angeles. I then went on to pursue my graduate studies in Public Policy at Harvard’s Kennedy School of Government. For the summer I went to work for the Democratic National Convention Committee in Denver, Colorado where I served as the Associate Director of Budget and Finance. From there, I moved to Chicago and became the Deputy Communications Director for Hispanic Media for the Obama-Biden Campaign. I currently work in the White House in the office of Presidential Personnel, with a focus on the economic agencies.

CHCI offered me an invaluable network of alumni who have served as my mentors, my coworkers, my study partners and the people who have taken chances on me and invested in my future. I thank CHCI for serving as my stepping stool into the world of federal politics.

3. What advice would you give current and future CHCI participants, especially those who also wish to work at the White House or within the Administration?

Don’t be afraid to ask for mentorship. Without the mentors in my life who have invested in my professional development, I would not have made the decisions I have made that led me to my current job in the White House. Also, make sure you identify where in the Administration you would like to work and let people know about it. Do your research, identify people who have held similar positions in the past, and ask for an informational interview.

I feel very privileged to have worked for Senator Robert Menendez (NJ) for a year and a half following my fellowship placement in the Senator’s office. On Menendez’s staff, I worked on a variety of issues, including budget, appropriations, taxes, telecom, technology, veterans and small business. I took leave to work on the Obama Campaign for Change in Orlando, Florida. I also volunteered with the Presidential Transition Team with Stephanie Valencia, as well as with the Education Policy Working Group focusing on English language learners. I am proud to have been involved in efforts to increase diversity on the Hill by implementing strategies to increase opportunities for those to gain employment on the Hill as well as those looking to move up.

CHCI made it possible for me to work on the Hill. Without this opportunity, I would not have understood the federal policy making process, gained an awareness of the steps necessary to further my career, nor had the experience necessary for the daily responsibilities of working with Congress, which is necessary in my current job. Most importantly, CHCI connected me to people who cared and were invested in my success, who served as resources and role models. I give much thanks to the CHCI alumni who have gone out of their way to provide opportunities to me. I especially thank the Members of Congress who open their doors to us and are key to our professional success.

3. What advice would you give current and future CHCI participants, especially those who also wish to work at the White House or within the Administration?

I met President Barack Obama in 2005, and I was fortunate enough to get his autograph in Dreams of My Father. In it, President Obama wrote: “Lizet, Dream big dreams!” Working for the White House seemed like such a distant goal, but dreaming about the possibility was important for me to work as hard as I could. As such, my main advice would be to always work hard. Working hard means going above and beyond and exceeding expectations in your job. Working hard means finding out every avenue that can lead you to key opportunities. In the case of hiring in the Administration, making the efforts to understand various aspect of hiring is very important. For example, know what departments and positions you are seeking; get to know people who have or have had the position you desire; be prepared and patient.

I welcome anyone to reach out to me for any questions you may have. We must be a resource for each other!

Office of Public Liaison and Intergovernmental Affairs, The White House

What advice would you give current and future CHCI participants, especially those who also wish to work at the White House or within the Administration?

Take in as much in as you can. Meet as many people as you can. Learn as much as you can. Find a long-term mentor that will give you honest advice and good guidance. Treat everyone with respect and kindness and don’t burn any bridges. You never know who you will have to ask for help from. Treat the person that cooks your food and picks up your trash with the same dignity and respect that you would treat your boss.