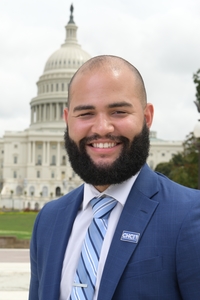 Xavier Arriaga was born and raised in Hartford, Connecticut by a single Puerto Rican mother of three and has intimately observed the cyclical nature of poverty firsthand. He learned early about the injustices that have continuously affected low-income, urban communities and youth. Xavier is passionate about creating meaningful public policy to remedy the damage that poor urban development and educational inequity have wrought in urban communities of color. His upbringing and experiences have fueled his passion for public service. While a student at Hartford Public High School, he worked closely with the Urban League of Greater Hartford as a volunteer and participant in their Summer Youth Employment Program, and received the Urban League’s annual Imprints in Youth Achievement Award. Additionally, he was selected as one of only five American high school students to participate in the 13th World Summit of Nobel Peace Prize Laureates in Poland.

Xavier was the first person in his family to go to college and graduated with his Bachelor of Arts in economics from the University of Connecticut. During his time at UConn, he served as a trip director for the university’s Alternative Service Breaks Program, leading two trips to Detroit focusing on urban development, education, and civic engagement, each with 54 participants. Xavier also participated in and worked very closely as a mentor for the Student Support Services program, which focused on fostering the success and retention rates with first-generation students from underrepresented communities in higher education. He also worked with the Dean of Students to facilitate a course entitled, “Privilege and Possibilities,” and later served as a Teaching Assistant working with mentors to increase retention among first-year students. Xavier has been recognized as a Leadership Legacy Student and as a Spirer/Dueker Student Humanitarian Achievement Award recipient.

As an intern with Community Solutions, Xavier assisted with researching best practices and associated costs of shared office spaces and food incubators for the Swift Factory, a North Hartford Promise Zone neighborhood revitalization project. Xavier also interned at the State of Connecticut’s Department of Children and Families, working under the Program Director for the Office of Research and Evaluation. He dove deep into child fatality and arrest reports data and presented to the agency’s Racial Justice workgroup on racial disproportionately data. Most recently, Xavier interned with the Congressional Research Service’s Office of Foreign Affairs, Defense, and Trade. Xavier contributed to two short reports on the Junior Reserves Officers’ Training Corps (JROTC) and Selected Reserve suicide rates.

As a CHCI Public Policy Fellow, Xavier strives to connect with and learn from young Latino leaders about social change and community development.  Xavier hopes to learn about the legislative process to develop skills in research, analysis, and implementation of effective policies that will increase economic mobility, public health, and safety for urban communities of color and all Americans through sustainable and cost-effective practices.