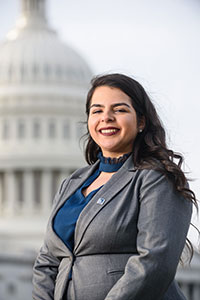 Yamaisi Errasti was born in Miami, FL to proud and hardworking Cuban parents who left Cuba hoping to provide a better life for their family. Yamaisi’s family relocated to Charleston, South Carolina when she was 15 years old. While the transition was difficult, she slowly became accustomed to her new home and became passionate about her Hispanic heritage as she noticed the lack of Hispanic representation in South Carolina compared to Miami. She has made it her mission to make sure there is a seat at the table for the Hispanic community.

Yamaisi currently attends the University of South Carolina (USC) and is majoring in Business Economics. She’s been very involved with the Hispanic students on her campus and quickly found passion in fostering leadership amongst her peers. After a short time living in China, Yamaisi became a member of Kappa Delta Chi Sorority Inc., a Latina founded sorority on USC’s campus. She was voted in as the President of the Multicultural Greek Council, leading a group of students in breaking barriers and stereotypes on campus through cultural events, excelling in academics and giving back to the community.

Yamaisi is also a member of the Latin American Student Organization, Office of Multicultural Student Affairs President’s Council, Russell House Leaders and the L.E.A.D Retreat Advisory Council. She hopes to pursue a PhD in Economics after her undergraduate career. As a CHCI intern, Yamaisi hopes to learn how other Latino leaders are making an impact in their communities.