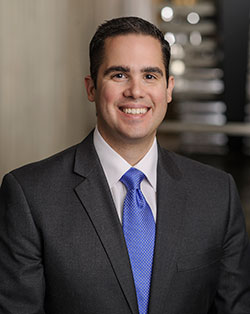 The morning we arrived at the U.S. Citizenship and Immigration Services office in Newark, New Jersey, the line stretched around the block. I was 11 years old, the son of Cuban immigrants and the grandson of a former political prisoner who had sought refuge in the United States—part of the first generation of my family born in this country. Despite my young age, out of a sense of duty motivated by my passion for American history and civics, I had made it my mission to help my elderly grandparents prepare for their citizenship exam. That morning, I accompanied my grandparents to their exam and remember anxiously awaiting the results. After what seemed like an eternity, my grandparents emerged triumphantly; big smiles across their faces. Later that afternoon, as I watched my grandparents sworn in as American citizens, I felt an overwhelming sense of pride and accomplishment.

Years later, my early passion for civics would come to life. During the summer of 2000, the Congressional Hispanic Caucus Institute (CHCI) provided me with an internship in Washington, D.C., which helped me channel the lessons of my upbringing toward a career in public service, business, and the law. As part of the CHCI program, I interned for U.S. Senator (then Congressman) Robert Menendez, who represented my hometown district. I helped him research and draft legislation related to international affairs, as well as education and transportation issues that affected our community. It was a dream come true. Just as I had helped my grandparents a decade earlier, I was now helping many others … from the halls of Congress. CHCI provided additional training in policy and advocacy, and encouraged our internship class to bring back to our communities the lessons we learned and to draw strength from the relationships we had forged.

Inspired by CHCI’s encouragement to return to our communities and utilize what we had learned to help our friends and neighbors, I returned home to New Jersey to complete my undergraduate studies at Saint Peter’s University. I never thought I would have the opportunity to use my CHCI training, however, under catastrophic circumstances. During my senior year, the university and the broader community of Jersey City (which overlooks New York City) experienced the 9/11 attacks. Drawing from my time as a CHCI intern, I helped organize student volunteer efforts and put to the test many of the leadership lessons I had been taught. As our community worked to rebuild after the tragic circumstances of 9/11, I felt pride and satisfaction in the resilience and strength of my family, friends, and neighbors. I knew then that I would commit myself to public service.

Guided by my desire to one day enter public service, and with the encouragement of CHCI mentors, I applied and was accepted to Harvard University’s Kennedy School of Government, where I earned a master’s degree in public policy. The classes were tough and throughout my time at Harvard there were many sleepless nights of study. Yet, led by the principles I learned during my time with CHCI, I held steadfast and did well in my courses. I received Harvard’s Public Policy and International Affairs Fellowship, which in turn prepared me to serve during graduate school as a policy instructor to a new class of CHCI interns.

After graduation in 2004, and with the memory of 9/11 still fresh, I went directly to Washington, D.C., seeking to find a role where I could best serve my nation. My efforts paid off and I was appointed by President George W. Bush to serve in the newly formed U.S. Department of Homeland Security (DHS), based in D.C. As a new organization, DHS was in many ways a startup and I was a member of the initial team that helped build the agency from scratch. During my time at DHS, I had the opportunity to work on some very interesting initiatives. I coordinated the U.S.-UK Joint Contact Group, an international alliance that promotes dialogue and cooperation in areas such as counter-terrorism, immigration, and cybersecurity. I also served as a media spokesperson to help inform our communities of new preparedness and readiness initiatives.

At the end of my appointment, inspired by CHCI’s strong emphasis on community, I returned to New Jersey. In the years that followed, I used my public affairs experience at the advisory firm KPMG LLP where I helped develop corporate social responsibility programs during the financial crisis. Motivated by CHCI’s commitment to education, I re-enrolled in school, this time staying close to my community, attending law school at Seton Hall University. During this time I also became a husband and father.

Today, I am a lawyer in the NJ offices of Lowenstein Sandler LLP. I am proud to be at a law firm that, like CHCI, fosters an entrepreneurial culture that is committed to serving our community. In particular, my practice focuses on helping organizations (from small businesses to global companies, as well as public agencies) solve a wide variety of complex legal challenges. In line with my experience in the public sector, my law career allows me to have a positive impact on my community by helping my clients receive honest and thoughtful counsel on sometimes life-changing decisions.

As a CHCI alum, I am especially proud of my firm’s pro bono work, through which I currently represent the surviving members of a family of asylum seekers who stood up against gang violence but were eventually driven out of their home country. Recently, I accompanied one of them, a mother and teacher, to an appointment with U.S. Citizenship and Immigration Services in the same building I visited with my grandparents years ago. The line still stretched around the block. This time, however, my group was greeted by a familiar symbol, the seal of a new Federal agency, the U.S. Department of Homeland Security. I think my grandparents would have been proud.