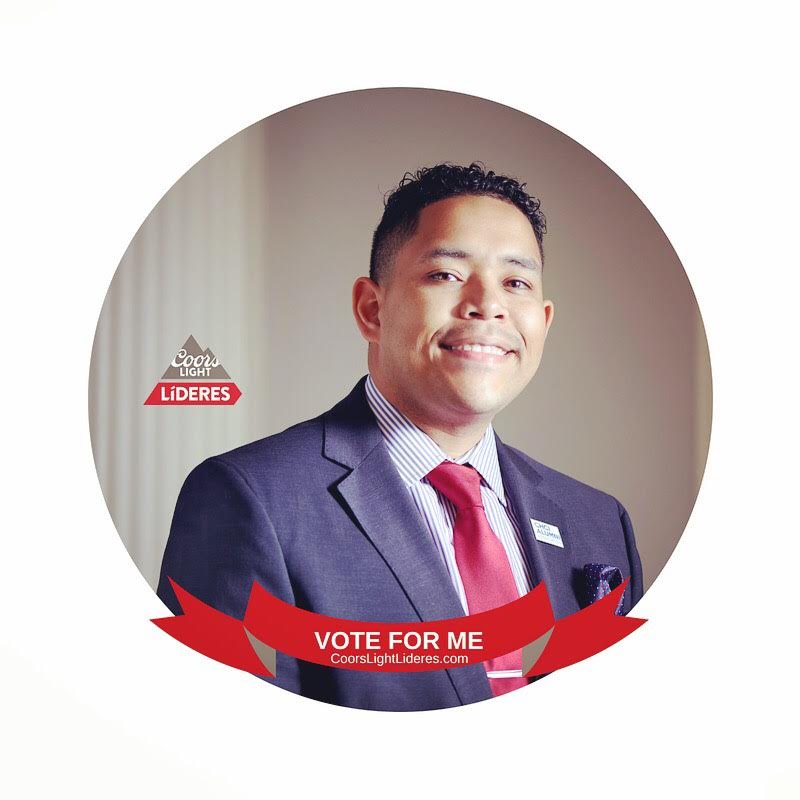 Washington, DC — August 8, 2018 —Amilcar Guzman, member of the Congressional Hispanic Caucus Institute (CHCI) Board of Directors and National President of the CHCI Alumni Association, has been selected as one of 12 Coors Light Líderes of legal drinking age finalist for his commitment to empower the Latino community. Coors Light believes in rewarding the dedication and tenacious spirit of emerging leaders who selflessly work hard to achieve success by helping others. Amilcar Guzman is one of 12 líderes who are competing to become the 2018 Coors Light Líder of the Year through an online public voting competition.

The public can vote for Amilcar Guzman at www.CoorsLightLideres.com through August 31, 2018. The winner will receive a $25,000 grant on behalf of their nonprofit of choice to support their mission and efforts. Voting rules and restrictions at CoorsLightLideres.com apply. Must be 21 years or older. Void where prohibited.

“I am honored to represent my community for this year’s Coors Light Líderes program,” said Amilcar Guzman, National President of the CHCI Alumni Association. “Coors Light has made a commitment to the Hispanic community to recognize and reward the dedication and tenacious spirit of emerging Latino leaders like me. I am grateful for the opportunity to compete and hopefully win a grant for CHCI.”

Amilcar Guzman was selected as one of the 2018 Coors Light Líderes because of his commitment in supporting the professional development of CHCI Alumni, mentoring young students and advancing the Latino community.

“Through the Coors Light Líderes program, we have the opportunity to create awareness about 12 outstanding Latino leaders who are inspiring others and making a difference to champion leadership in communities across the country,” said Alberto Senior, who leads MillerCoors’ national Latino community efforts. “For more than a decade, the Líderes program has recognized the unique accomplishments of over 170 leaders, and I am excited about awarding the 2018 Líder of the Year with a $25,000 grant that will help the Latino community climb on even higher.”

Since 2006, the Coors Light Líderes program has raised awareness and highlighted the achievements of national and local leaders within the Hispanic community. The Coors Light Líderes program offers up-and-coming Latino professionals leadership tools, counsel and networking opportunities. Join the conversation at CoorsLightLideres.com, Facebook, LinkedIn and on Twitter using @coorslightlider.

Coors Brewing Company was founded in 1873 by Adolph Coors, who chose the Clear Creek Valley in Golden, Colo., for his new brewery because of the pure water in the nearby Rocky Mountain springs. The brewery’s original and most enduring beer is Coors Banquet (Coors.com, Facebook.com/CoorsBanquet, YouTube.com/OfficialCoorsBanquet), still brewed exclusively in Golden using only Rocky Mountain water and high-country barley. Coors Light (CoorsLight.com, Facebook.com/CoorsLight, @CoorsLight on Twitter, YouTube.com/CoorsLight) was introduced in 1978 and now is the second-best-selling beer in the United States. Triple-filtered smooth Keystone Light (KeystoneLight.com, Facebook.com/KeystoneLight) is one the country’s most popular economy beers. Coors Brewing Company operates in the United States and Puerto Rico as part of MillerCoors, a joint venture of SABMiller plc and Molson Coors Brewing Company. Learn more at MillerCoors.com, at Facebook.com/MillerCoors or on Twitter through @MillerCoors.