The CHCI Alumni Association Chicago Chapter invites local alumni to vote for its next Chapter President from the candidates below: 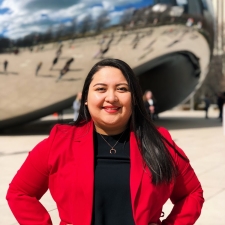 María currently serves as the program coordinator for the Hispanic Alliance for Career Enhancement (HACE) where she leads the high school and university leadership programs. Maria is a Chicago native whose parents immigrated from Mexico. She earned her B.A. in International Studies and Spanish from the University of Iowa.

Prior to joining HACE, María was a community organizing fellow at the Illinois Coalition for Immigrant and Refugee Rights (ICIRR). She led naturalization efforts in partnership with local organizations including the Mexican Consulate. She co-led the New Americans Democracy Project campaign, aimed to mobilize the immigrant vote during the 2016 elections. María is a Congressional Hispanic Caucus Institute (CHCI) alumni, after completing the congressional internship program at Congressman Luis V. Gutierrez (D – IL) DC office.

She now serves as the Director of Member Outreach and Marketing for the Chicago Alumni Board of the Congressional Hispanic Caucus Institute (CHCI). She is an active member of Sigma Lambda Gamma National Sorority, Inc.

As a first generation college student, CHCI transformed my life and career path. I whole heartedly believe in the mission and vision of the organization because I’ve lived through it. I’ve served on the Chicago board since I came back after graduation form college. There is tremendous room for growth of the alumni association and I hope to contribute in a meaningful and thoughtful way. Through my current job I am a liaison for a young professionals board and I know CHCI will have that holding in Chicago in the near future. With the resources, insight and experience I currently hold, I hope to lead CHCI to the next level. My life mission and vision aligns with the organization and I hope to be able to lead our platform and vision in my hometown. 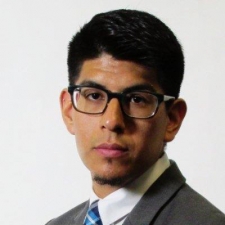 Omar Martinez Gonzalez came to the United States at the age of three from Mexico City, Mexico, and grew up in the Rogers Park neighborhood of Chicago, graduating from Roger C. Sullivan High School’s Medical & Health Careers Academy in 2009. He enrolled at Wilbur Wright College during the fall 2009 semester because it was close to home and he had heard good things about it. At first, he did not intend to get his associate degree – he wanted to earn some credits to transfer to a four-year university and get his bachelor’s. But he soon got involved with student government and other clubs, and says that he “fell in love with the rigor of the academics and the professors at Wright.” He utilized student resources, especially noting the assistance he received from the Transfer Director, who helped him navigate the transfer process as an undocumented student. After 2 years, he graduated from Wright with high honors in spring 2011.

He continued to take courses at Wright until Dr. Tracy Mitchell of the Chemistry Department encouraged him to think about getting his bachelor’s degree, and he transferred to the Illinois Institute of Technology in the fall of 2012. There, he worked towards a co-terminal B.S./M.S. degree in Biology until the end of fall 2013, when he moved to Washington, D.C. to do a three-month internship in the United States House of Representatives. He ended up staying in Washington for three years, moving on to a political consulting firm where he worked as a federal lobbyist, representing the Commonwealth of Puerto Rico during the start of their fiscal crisis, and coordinating a college access program for underserved students through the Latino Student Fund.

Since moving back to Chicago in fall 2016 to finish his master’s degree, he has worked at Northwestern Medicine coordinating the Northwestern Medicine Scholars Program, and at a law firm working on immigration cases. He graduated with an M.S. in Biology in spring of 2018, and plans to apply to medical school, hoping to combine all of his experiences to continue influencing government and policy at the state and federal levels for the benefit of his community. He says that his immediate goal is to “help drive humane, comprehensive immigration reform, as I am currently a DACA recipient.”

I am running for President of the Chicago chapter of the CHCI Alumni Association, because I want to empower our local familia, and to continue to help it grow. CHCI played a vital role in my development as a leader, and since graduating from the program in the spring of 2014, I have consistently engaged with our membership, first through the D.C. chapter during my two-year stay in D.C. after the program, and through the Chicago chapter since moving back in 2016.  I envision the Chicago chapter playing a bigger role in recruitment and fund-raising efforts, so that we can send more Chicagoans to the Hill to benefit from this life-changing opportunity. As a DACAmented, queer Latino, I realize the privilege of being a part of the CHCI-AA network, and I want to tap into its full potential to empower our membership here in Chicago.