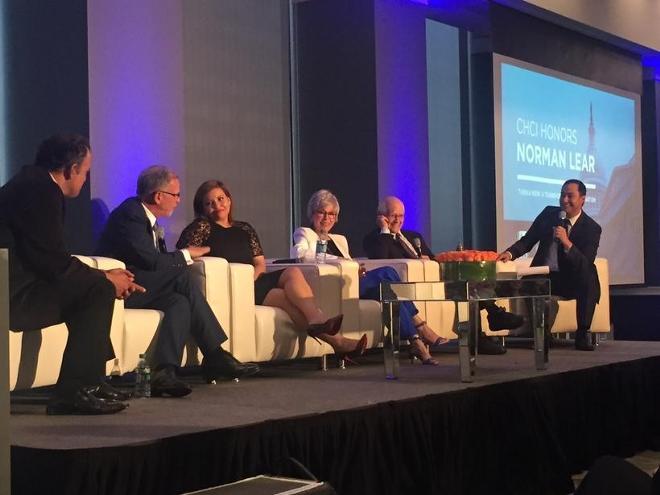 On Friday, June 2nd, the Congressional Hispanic Caucus Institute (CHCI) awarded its inaugural “Pioneer Award” to television trailblazer Norman Lear at the City Club in downtown Los Angeles recognizing his commitment and contributions to diversity and inclusion in American television.

CHCI is proud to honor an American Icon, and inspirational story teller Norman Lear. Mr. Lear understands that representation matters whether it is in Congress, the C-suite, or in Hollywood,” stated CHCI President and CEO, Domenika Lynch. 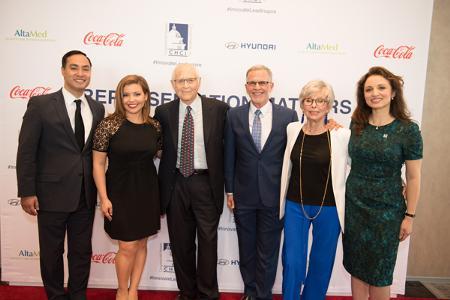 CHCI Chair and Texas Congressman Joaquín Castro, presented Norman Lear with CHCI’s “Pioneer Award,” and described him as “a pioneer who has broken down barriers on behalf of not only Latinos, but also African-Americans.”

Rep. Castro conducted a one-on-one interview with Norman Lear titled “Then & Now: A Transformative Conversation.” They touched on Lear’s important achievements and the state of the U.S. film and television industry in 2017, compared to the 1970’s. When asked how much progress has been made towards diversity and inclusion on television, Lear responded, “in terms of what influence we need, we have a long way to go, whether we’re talking about race, or color, or any of the social problems.”

Actors from the 2017 remake of “One Day at a Time,” including legendary EGOT winner, Rita Moreno, star Justina Machado, and guest star Tony Plana participated in the conversation. Actor and comedian Paul Rodriguez also joined and reminisced about Lear’s influence in his career and the creation of 80’s sitcom “AKA Pablo.” The panelists discussed their personal experiences in Hollywood; the challenges minority actors continue to face both on-screen and behind the camera, and what Latinos can do collectively to achieve progress.
Rita Moreno acknowledged the challenges that still exist for minority actors, but felt optimistic about the future of Latinos in entertainment. Moreno believes that there are more opportunities today but emphasized that industry allies like Lear are still very necessary. Over 150 entertainment Industry executives, Latino leaders, CHCI alumni and CHC members were in attendance.

Since the early 70’s Television Pioneer Norman Lear has brought us groundbreaking shows highlighting diverse cultures like “All in The Family,” “Good Times,” and “The Jeffersons,” as well as the recent Netflix Latino remake of “One Day At A Time.” Lear closed out the event with powerful words of wisdom. “There are two very important words: Over and next,” said Lear. “Live in this moment. It’s taken every second of my life to get here…so I live in the moment.”

While Lear has served as a pioneer for inclusivity, the recent UCLA Hollywood Diversity Report found that minorities make up 13.5 percent of lead roles – a stark contrast to the country’s population made up for 40 percent minorities. The report also found that minorities accounted for the majority of ticket sales for the top five films in 2015 and that films with diverse casts grossed higher profits. Yet, minorities continue to be underrepresented.

Members of Congress who attended:

The Washington Post: The Congressional Hispanic Caucus Institute wants to build a pipeline to Hollywood

The Hollywood Reporter: Norman Lear, ‘One Day at a Time’ Cast Reflect on Changing Opportunities for Latinos in Hollywood

The Huffington Post: Hollywood Legends Norman Lear and Rita Moreno Join the Discussion on Diversity in Film and Television