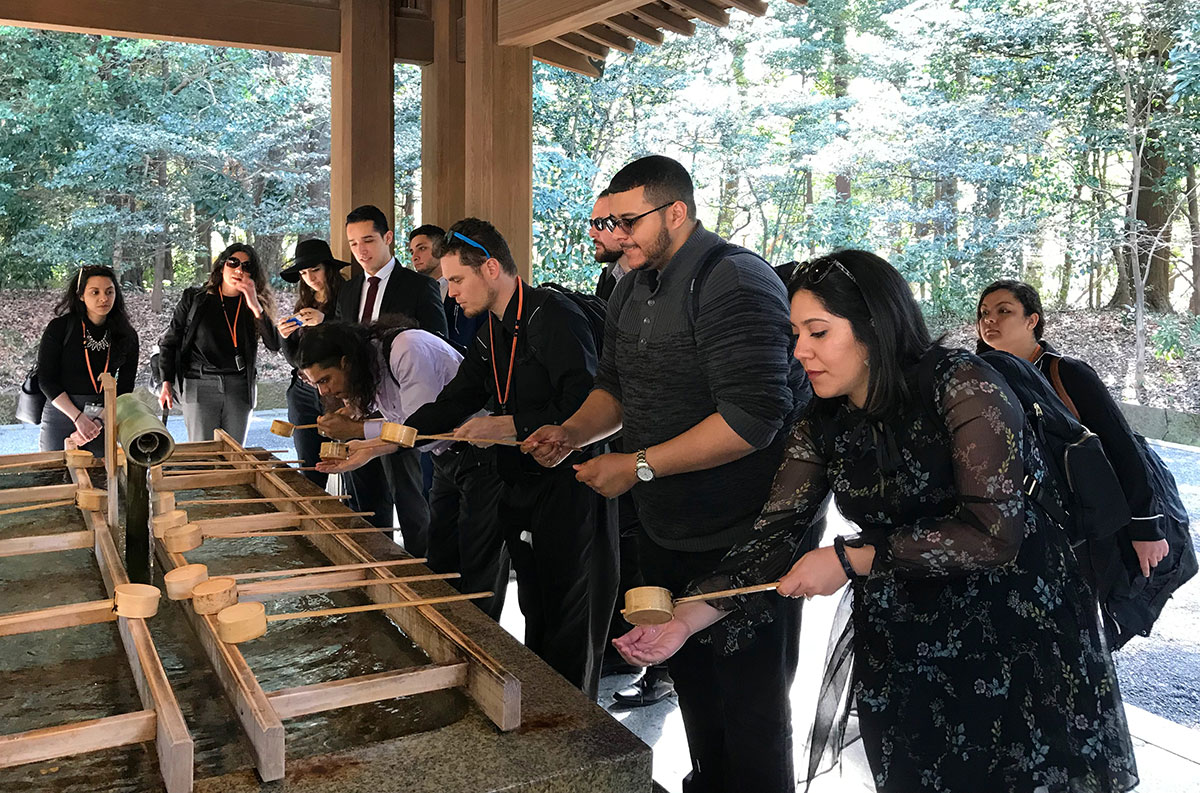 A select group of Congressional Hispanic Caucus Institute fellows and alumni spent a transformative week in Japan as part of the government of Japan’s KAKEHASHI cultural exchange program. Promoted by the Ministry of Foreign Affairs of Japan, The KAKEHASHI Project is dedicated to enhancing international understanding among the people of Japan and the United States and enabling future leaders of both nations to build broader perspectives and networks. Seventeen CHCI fellows, alumni, and staff took part in the program from March 7–15, 2018.

Participants spent four days in Tokyo, during which they had the opportunity to meet with staff from the Ministry of Foreign Affairs to learn more about Japan’s diplomatic relations in Latin America, as well as a tour of the National Diet, the equivalent of the U.S. Capitol. They also had the opportunity to travel to Hokkaido, Japan’s northernmost island, where they engaged with members of the Hokkaido Prefectural Assembly. Participants were surprised to discover that not only did Japan have more than eight active political parties represented at various levels of government, but that they included an active Communist Party.

“My favorite moment of the trip was visiting the government Diet building and the local government in Hokkaido. We were able to learn about Japanese government and discuss similarities and differences compared to the US government, including the various political parties represented in Japan, diversity in politics, and differing staff sizes,” said Daniel Lind, CHCI alumnus. “I learned about Japanese daily life and cultural norms by interacting with our various guides and asking them questions throughout the program, ranging from religion to mental health issues, and transportation.”

The experience changed perceptions about Japanese life and culture. Participants noted the Japanese commitment to infrastructure, health, and cleanliness that was apparent everywhere they traveled, as well as the family-friendly nature of most public Japanese spaces. In addition, the group had the opportunity to learn more about Japanese religious life through a Zen meditation and calligraphy lesson and a visit to the Meiji Jingu Shrine. The spirit of religious tolerance that exists in Japan was an area people were particularly interested in learning more about.

This was the second cohort of CHCI fellows, alumni, and staff to participate in the KAKEHASHI project, and the experience was just as impactful. The program left participants energized and full of ideas on how to create a stronger relationship between the U.S. and Japan, as well as enhance their own leadership skills.

CHCI alumnus and program participant, Ryan Garza, enthusiastically endorsed the experience. “The KAKEHASHI trip was life-changing. It helped me understand Japanese culture, their burgeoning economy, and many rich traditions. I would recommend the trip to anyone who is considering it! Easily the best ten days I’ve had.”

CHCI is extremely grateful to the Japanese Ministry of Foreign Affairs and the Japan International Cooperation Center for their support and collaboration.