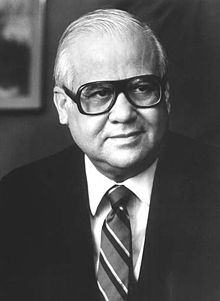 The Congressional Hispanic Caucus Institute (CHCI) extends condolences to the friends and family of co-founder Congressman Eligio “Kika” de la Garza, who passed away on March 13, 2017.

For more than 40 years, Congressman de la Garza has been an inspiration for young Texans interested in public service. As a founder of the Congressional Hispanic Caucus, he laid the groundwork for what today is a 30 member caucus that represents the diverse interests of Latinos from across the United States.

“I am very saddened to learn of Kika de la Garza’s passing,” said Rep. Joaquin Castro, CHCI Chair. “His life was one of committed service – first in the Navy and Army, then in the Texas Legislature, and later in the U.S. Congress. He worked tirelessly to make life better for Texans, pushing for greater educational opportunity and federal support for farmers and ranchers. De la Garza consistently stood up for marginalized people in our nation and supported historic civil rights legislation that propelled important progress in our society. A son of the Valley, he deeply understood U.S.-Mexico relations and helped foster closer, more constructive ties between our nations. Kika de la Garza was one of the exceptional Texans whose work inspired me to pursue a career in public service. Our state and nation benefitted tremendously from his lifetime of service and sacrifice. My prayers are with his family and loved ones in this difficult time.”

“Congressman de la Garza envisioned a Latino community that was more empowered, educated and civically engaged. He brought his vision to life through decades of action and leadership,” said CHCI President and CEO Domenika Lynch. “As a co-founder of the CHCI who was dedicated to developing the next generation of Latino leaders, Congressman de la Garza’s legacy will be honored every time we graduate a young Latino leader from our leadership programs.”

Congressman de la Garza was a true visionary of his time and we will always be grateful for his leadership and service to our Nation.