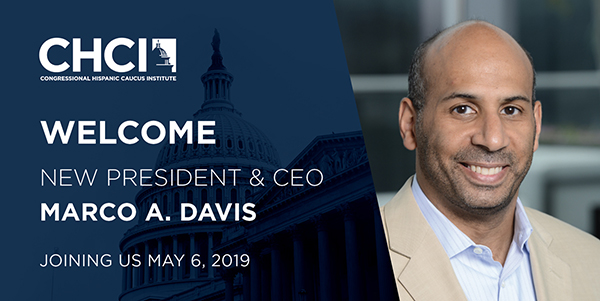 Washington, D.C. – The Congressional Hispanic Caucus Institute officially announced today the appointment of Marco A. Davis as CHCI President and CEO, effective May 6, 2019.

Davis joins CHCI with more than 20 years of experience in leadership development, academic achievement, community advocacy, and civic engagement. As President and CEO of the institution, Davis will continue to guide and develop CHCI offerings, and expand the organization’s thought leadership, further establishing it as a critical partner for diversity across industries and a true champion for all Latino students.

Davis comes to his new position after being a partner at New Profit, a national nonprofit venture philanthropy, where he led Capitalizing Diverse Leaders and Organizations – an effort to create a more equitable social sector, and served as organizational lead on diversity, equity, and inclusion.

“After an extensive search for the right leader, we are incredibly fortunate to have Marco join the CHCI familia, helping propel CHCI’s mission of elevating Latino leadership and providing equal access to opportunities across all industries,” said CHCI Chair, Congressman Ruben Gallego. “Marco’s extensive experience and commitment to fostering diverse excellence in leadership will no doubt advance the legacy of Domenika Lynch in raising the institution and developing new agents of change.”

“As a fervent believer in the power of education and in opening doors for next generation leaders, I am truly honored to join such a prestigious organization that has served our nation’s youth and the Latino community for the last 40 years,” said Marco A. Davis. “It is a privilege to have an opportunity to help shape the evolution of the organization and to work alongside CHCI’s invaluable leadership team: Rep. Gallego, the esteemed members of the Board of Directors and Advisory Council, engaged alumni network, and talented staff, as we continue to fuel the country’s youngest, fastest-growing community and strengthen the diverse leadership pipeline.”

Davis served in the administration of President Barack Obama as Deputy Director of the White House Initiative on Educational Excellence for Hispanics and as the Director of Public Engagement for the Corporation for National and Community Service. Previously, he was Director of Global Fellowship and Regional Manager for Latin America at Ashoka’s Youth Venture and led leadership development for UnidosUS (formerly the National Council of La Raza), creating the Líderes Initiative.

Davis has served on the boards of Education Leaders of Color (EdLoC), Education Design Lab, Educators for Excellence, and the Management Assistance Group. He has also been a Pahara-Aspen Education Fellow and Hispanics in Philanthropy NGen Lideres Fellow. An alumnus of Yale University, NY native, Davis, now lives in Washington, D.C. with his wife and daughter.