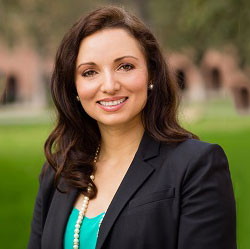 In 1776, our immigrant nation declared itself free from England and avowed on parchment that all Americans have a right to life, liberty and the pursuit of happiness. Nearly 100 years later, the Statue of Liberty arrived in the Hudson River, a gift of the admiring French, and this physical representation of our welcoming immigrant nation stood sentry to gloriously greet millions of dreamers to Ellis Island.

In 2017, our nation threatens to build a great wall to keep out immigrants from the south and many Dreamers already on our shores are told that they may no longer have a right to pursue the privileges etched into the very foundations of our country.

The United States is at an inflection point. For most of us, this is a startling moment. A moment when our fabled institutions may not protect our citizens. A moment when immigrants are viewed with a hostility not seen since the 1930s. A moment when many Americans are at odds with each other, in disagreement over what it means to be an American.

The Congressional Hispanic Caucus institute (CHCI) will double down on our efforts to help young Latinos get internships and fellowships in Washington, DC, so that our next generation can rise up to become leaders in Washington and around the country. This has always been our mission. A mission that is absolutely vital to the well-being of our community and of our country.

Our leadership must reflect America’s diverse range of thought, experience and ideas. This is how a nation of immigrants succeeds and has succeeded for 243 years. And Latinos are our largest minority group, over 55 million strong, yet today, vastly underrepresented in leadership roles. If Latinos are going to be heard, we need to protest with our vote, our purchasing power, AND we need to be in conference rooms, board rooms, and the Situation Room. We need to influence and make the decisions. We cannot afford to sit silently on the sidelines.

As an incubator for emerging Latino leaders, CHCI’s participants offer a range of interests and opinions as broad as the Latino community itself. Our leadership development curriculum and paid congressional internships and fellowships help build confidence, strategic thinking and the vital skills that translate to any profession or institution.

Throughout the years, CHCI has developed robust leadership pipelines across industries, including energy, technology, the financial industry and government. We connect our program participants to local and national leaders from various professions and industries as well as to thought leaders from different political parties and philosophical inclinations. Our goal is to ensure that CHCI alumni are well positioned to seize opportunities in the most competitive industries.

This year, CHCI approaches its 40th anniversary. Through four decades of work, we have earned distinction as a pillar of strength in Latino civic and political life. Our 40th anniversary milestone coincides with this pivotal moment in our nation’s history. As our country enters a disruptive era, CHCI must respond to the demands of our current reality.

This is a time for action. CHCI will expand its capabilities to serve more, to collaborate more, and challenge more. It is our greatest desire that CHCI will evolve into an institution that develops global leaders who espouse the ideals of a free, just and compassionate society. Game changers who unite us through their inspiring actions. Indeed, it is a privilege to lead this organization during these critical and defining times.

Domenika Lynch is president and CEO of the Congressional Hispanic Caucus Institute, a nonpartisan nonprofit based in Washington, D.C.