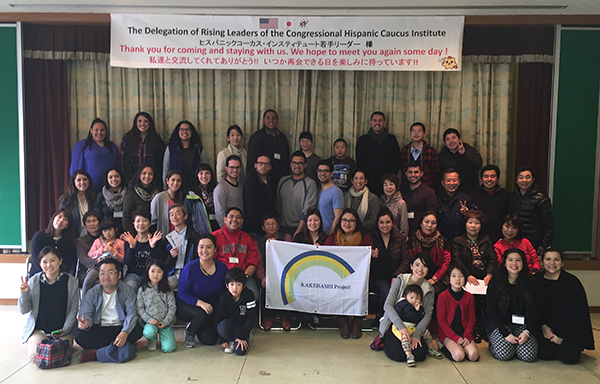 From March 22-30, 2016, twenty-five Congressional Hispanic Caucus Institute (CHCI) fellows, alumni, and staff returned from a cultural exchange trip to Japan made possible through the government of Japan’s KAKEHASHI program which promotes mutual trust and understanding among the people of Japan and the U.S.

During their time in Japan, the fellows and alumni met with leaders from the recently formed Democratic Party of Japan and the Democratic Liberal Party who serve in the Diet, which is the equivalent to the United States House of Representatives, to discuss Japan’s domestic and international policy priorities including energy, infrastructure, technology, childcare, and women’s issues. They also learned that CHCI is the first official international delegation to meet with the newly formed party.

The fellows were impressed by many facets of Japanese life such as their infrastructure, urban planning, transportation and traditional customs. They spent one day in the rural mountains of Japan with local host families. The time spent with host families helped them learn that although there are many differences between American and Japanese society, both cultures share many of the same values and aspirations such as the importance of education and family.

The participants returned enlightened and motivated to use this experience in their personal and professional lives. Access to this opportunity will have a profound impact on their ability to become the future leaders of America. We are proud of a successful trip and know that the result will be a stronger bridge that unites both nations and their peoples.