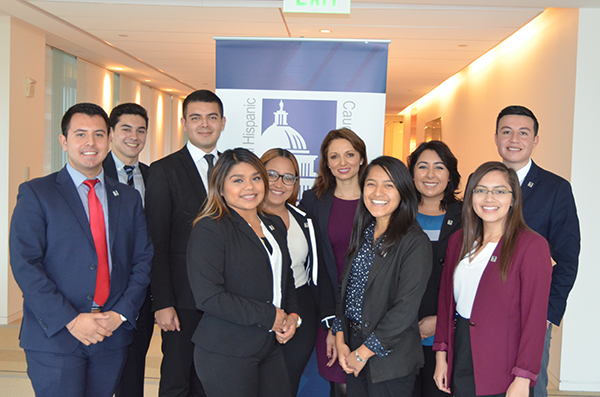 On November 16, CHCI said farewell to its Fall 2016 Congressional Interns. The reception was kicked-off by Shell representative, Patricia Tamez, who welcomed the guest to their offices and emphasized their commitment to investing on young Latino talent. CHCI President & CEO, Domenika Lynch also provided some encouraging words of wisdom to the nine CHCI graduates, as they prepare to leave D.C. to become leaders in their own community.

CHCI Fall Intern, Josue Ambriz, delivered the keynote remarks on behalf of the graduating class, where he expressed his gratitude to CHCI for his experience as an intern, but also underscored the need to remain active and step up to be the leaders that they were born to be. The program concluded with the remarks from CHCI Washington, D.C. Alumni Chapter President, Amilcar Guzman, who welcomed the inters to rapidly-growing CHCI Alumni Association.

It has been an honor for CHCI to host such a talented group of aspiring Latino leaders. With each graduating class, we propel the dreams and aspirations of the young people we serve, ensuring that we continue to educate, empower and connect our nation’s Latino youth.