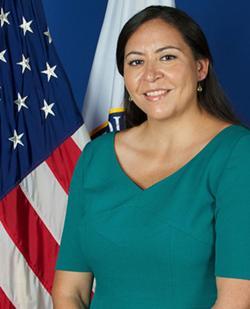 The CHCI Alumni Association (CHCI-AA) is proud to recognize CHCI Alumnus Alejandra Ceja (1996-97 Public Policy Fellow) as the recipient of the 2015 Medallion of Excellence for Distinguished Alumnus. This prestigious annual award, presented during CHCI’s Public Policy Conference, recognizes a CHCI alumnus who has made an outstanding contribution to the Latino community, highlighting the impact of CHCI’s programs and the prominence of its alumni. As a founder, former president and active senior member of the CHCI-AA, Alejandra Ceja has played a pivotal role in expanding its network of more than 3,200 alumni across the country and shepherding a new direction for the Association.

Alejandra Ceja helped pioneer the full engagement of the CHCI-AA on the CHCI Board of Directors, securing a full voting seat on the Board in 2010. She regularly supports CHCI’s public policy work as a sought-after expert, appearing at CHCI’s Public Policy Conferences, Capitol Hill briefings and professional development programming for current participants and alumni. Year after year, Alejandra has served as an inspiring and dedicated mentor to the increasing number of students and young professionals who come to Washington D.C.

Alejandra Ceja came to Washington in 1996 to accept CHCI’s prestigious Public Policy Fellowship, where she worked on Capitol Hill with Congresswoman Lucille Roybal-Allard and at the National Council of La Raza. From there, she went on to occupy a variety of notable and prestigious roles, such as, program examiner for the White House Office of Management and Budget where she helped develop the federal budget for the U.S. Department of Labor and the Corporation for National and Community Service and as senior budget and appropriations advisor at the House Education and Labor Committee. Prior to her current appointment, she served as chief of staff for Under Secretary of Education Martha Kanter.

Ceja is a native of Huntington Park, CA, though her family’s roots trace back to Michoacan, Mexico. She received her M.P.A in public administration at Baruch College, City University of New York, and her B.A. in political science at Mount St. Mary’s College in California. She is also a member of the National Urban Fellows, the National Hispana Leadership Institute, a graduate of the Presidential Management Fellowship program and a 2015 Marshall Memorial Fellow of the German Marshall Fund of the United States.